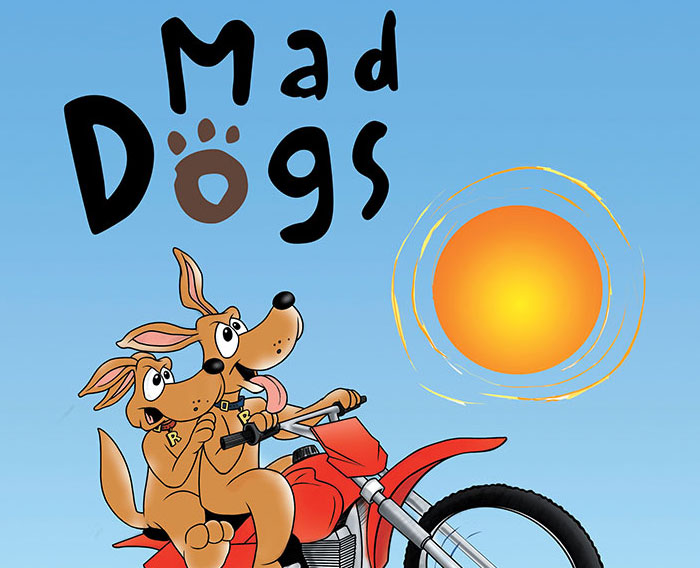 On a sheep station way out west, the life of a dog was simply the best. Red and Blue were in charge of the mob and they really did love their job.

Each morning started with biscuits and bread and a scratch and a shake as they jumped out of bed. Then off to work they would go.
They were the fastest, the others were slow.

Red looked at Blue and Blue looked at Red, and a puzzled question entered their heads. If Blue was like Red and as red as Red, then why was he called “Blue” instead?

They scratched their heads. They hadn’t a clue, but they still stuck together like glue.

The inspiration for Mad Dogs came about from a beautiful little red dog, Lady, who belonged to Ben’s daughter, Rachel. Lady would ride on the front of the motorbike with Ben and she would show signs of frustration at his riding ability. He says, “She would often give me a look of disapproval at my slow speed, as if to say that she felt I could do much better.” And so, the story of Mad Dogs was born as Ben imagined dogs on a farm out west, getting up to mad mischief and farm frolics.

Check out the interview below, to meet the original Mad Dog Lady and hear a bit more about I.B. Gumnut’s writing process and inspirations.